Combining a motorcycle ride to Palolem Beach, Goa India with a week stay on the beach was exhilarating and relaxing, and proved that these old bones have a lot of mileage left in them.

At 6am the city of Bangalore India is still quiet and sleepy -- all except for the dogs that bark incessantly; they never seem to sleep. The air was crisp, and with our backpacks strapped on we boarded our motorcycles and set out to beat the soon-to-emerge morning rush hour.

By the time the locals were up and scurrying to work, and filling the streets with their chaotic driving, 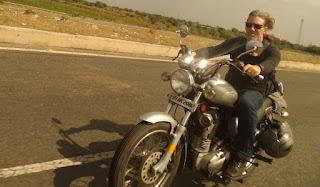 we were well outside the city -- streaking west on highway AH43 at 100 kph.

With 400 highway kilometers ahead of us, and no traffic to speak of, all we could do was sit, and wait -- periodically passing one another to take up the lead to abate the boredom of highway travel.

That same boredom did not exist on the same stretch of the highway on the way back (seven days later) however. With lots of cars, trucks and buses bustling between lanes, we were like players of the game Frogger -- as we’d dodge around the slow-moving vehicles that were traveling at 50-70 kph -- to be found in either lane --, while doing our best not to get run over by the cars that would suddenly appear -- seemingly out of nowhere -- baring down on us as they raced past at 140 -- horns blaring and high beams all but blinding us from behind.

With the morning sun rising behind us as we continued west, two 30 minute breaks come and gone, we turned off the highway onto a single lane road. Like cowboys on motorized horseback our three bikes thundered through roadside villages. Little kids hearing our approach  gathered to stare, wave and cheer to strangers who came from from somewhere beyond the edge of their universe. And with a roar we were gone as fast as we arrived.

After leaving yet another village the road led us into a two hour-long ride through a forest; single lane, where we encountered no more than fours cars the entire time. It was an adventure, peaceful and energizing. The trees keep the air cool, and my new helmet with it’s built-in sun visor [that I moved down over my eyes] proved most helpful as the sun was now easing in front of us in the afternoon sky, tossing sun rays at our eyes like arrows that we had to defect. We thundered ahead, like road warriors on a quest.

If the forest road was exciting and peaceful, the mountain roads we traversed next were dangerous but exhilarating.

We raced through one “S” curve after another with no end in sight. Up the one side, down the next it continued for another two hours, Then we felt the air begin to heat up and I knew the beach was not too terrible far off.

At 80-100 kms we raced on, but always vigilant: you never knew when you’d come out of a turn and be faced with a meandering cow (or many), or an oncoming car, truck or bus headed towards us as they passed slower-moving vehicles.

On a separate trip to Om Beach [in Golkarna] with Rajeev by car, we traveled through a mountain road where five cows lingered -- one laying in the middle, the others standing about --, who didn’t give us a second thought: they simply refused to move despite him leaning on the horn. In fact, at one point the sitting cow looked back at us, then away as if to say “go fuck yourself, I was here first!”

As for those oncoming vehicles, I’ve long come to understand a basic driving rule in India: he who gets there first has the right of way. Once a vehicle commits to pass, it doesn’t matter that they’re in your lane. They got there first, and the oncoming traffic beware: move or get leveled!

In the United States multiple motorcycles traveling together will usually travel side-by-side, moving in tandem;  for example, when passing, the motorcycle closest to the passing lane would lead, the other would follow, and then re-position themselves again side by side.

Though the guys I ride with here in India will from time to time ride side by side on the highway, they don’t seem to be familiar with the concept of how to move in tandem; on the country roads it’s all for the best anyway, as we’ve many times been driven to the shoulder of road by oncoming vehicles.

Fortunately, on this trip that was rarely the case, Instead, it was the cars going in our direction that would continuously race with us -- passing us in any straight stretch they could find --, only to have us speed past them as soon as they got jammed behind the next slow moving vehicle ahead. 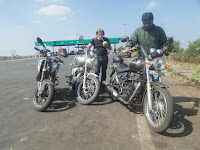 The Royal Enfield Thunderbirds (known as “bullets”) that Kiran and I drove were made for this type of riding; their engines torqued for mountain roads; the Duke that Nihanth was riding, with it’s off-road frame was equally up to the task as he navigated through the turns effortlessly and as smooth as the bounding of a gazelle.

For a foreigner, traveling the back roads of India is equally enjoyable and educational. As you make your way through villages you experience a place that time forgot; people going about their rural lives as though it was still the early 1900s, or for that matter, the 1800s --, with pushcarts or ox (or horse) pulled carts full of flowers, fresh vegetables or farm gear. The only visible signs that they were connected to the modern world is small scooters and motorcycles, and cell phones: it seems everyone has a cell phone. On one country road we passed a monastery (grand and impressive). At the gate was two Buddhist monks in full robes, on a scooter.

We pressed on, eventually exiting the mountain roads as we passed a commercial seaport, the smell of fish ever present in the air. Another 30 kms on small roads and we saw the sign: Palolem Beach.

There is a little town there with local food, pharmacy and incidental shops, none of which suggested 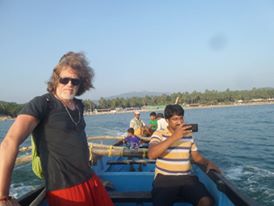 to us that we were at the beach.  But as we turned into the beach hut resort we’d be staying at, the sight of the surf and sand were inviting.

My Palolem Beach experience was everything I had hoped for: quiet, spacious and comfortable.

After a few days of sun, surf and Margarita’s, we were restless and decided to explore Agonda Beach just 10 kms north. Dressed in shorts and T-shirts for the short ride we were met with yet another fabulous day: plenty of sunshine and moderate temperatures.

Then, quite spontaneously our adventurism kicked into higher gear and we turned northeast as we decided to ride 60 kms to the Dudhsagar Falls instead. 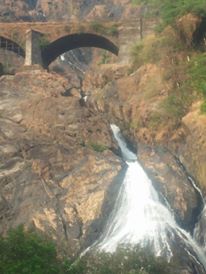 For motorcycle enthusiasts this too was a great ride; again winding country roads that went through a few villages, and again “S” curved hilly roads.

The closest town is 10 kms from the falls, and as we then learned -- to our disappointment -- you couldn’t actually ride to the falls, or so we were told. There is a 4x4 jeep service that will take you the 45 minutes up the mountain for about Rs. 500 per head (it holds seven people), plus a mandatory Rs. 30 for a life jacket.

But we were road warriors; so we streaked past those telling us “you can’t go there” up a dirt road. We came face to face with a section of the road submerged in about 3 feet (1 meter) or so of water.  We watched as a few jeeps were traversing through it on their way back down. Were the bikes high enough to wade through? We weren’t sure; the Duke would make it for sure, but my Thunderbird Bullet, which sat lower than Kiran’s was a question.

After a few minutes contemplation I decided not to try.  The trip had been great thus far, so why push the matter. Kiran really wanted to see the falls, so we opted for the jeep trip.  With he in the first seat and Nihanth and I in the rear two bench seats we ploughed through the water onto the roughest, rockiest dirt road you can imagine -- as if the rocks were actually placed by a sadist with the intent to jostle your insides into nothingness.

I cursed him every bump, “Agh” I’d grunt with every bump.  Finally the jeep stopped, Kiran got out and insisted that I take his place up front. It was noticeably better, but not enough that I didn’t continue to curse him under my breath for the next 40 minutes.
As it turned out, had we pushed ahead on motorcycles we would have only gotten about 15 minutes 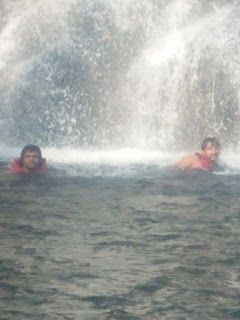 ahead until reaching a guard gate, which would have turned us away anyway. So the jeep was at least the right choice.

At our destination we exited the vehicles and began a short trek through a mountain trail that ended at the base of the falls. There was a large natural pool at its base, which after the rough ride was inviting. We dove in, and the cool mountain water was refreshing to the point it was “maybe” worth the trip. Wild monkeys provided entertainment as we watched them sprinting about the trails and trees.


Two days later we checked out of our beach hut and began the long ride home. It was only an hour into the ride that we were once again in the “S” curves headed up the mountain road, which was packed with cars and trucks. Nihanth and I in single file sweep around the right to pass, first one, then the other, swoosh, swoosh, then swung left back into the lane and immediately had to bank right into a right curve.

Without warning my rear tire slipped out to the left from under me, sending me and the bike and flying: we both skidded about 20 meters (60 feet). I'm still not sure if it was due to a wet or oil spot in the road. I didn't have to think about as I heard my helmet Bang! the road. For the first time in three years I was grateful to have been wearing a sturdy helmet or my brains would have painted the ground.

How the car behind me (we were moving at 80 kph) didn’t hit me is still unclear, though I am grateful with no explanation required. I was a bit stunned, dazed, as I lay on the side of the road. I think what held my mind momentarily captive was that nothing on my body seemed to be damaged. I got a scrape on my left shoulder, and another on my right knee -- even though the shirt nor pants ripped. My right ankle got twisted, but from all my athletic injuries through the years I could tell right away that nothing was broken; no muscles, ligaments nor tendons were ripped.

I looked at my bullet lying on its side like a wounded animal, and merely asked Kiran -- who was hovering over me asking if I was alright -- to “pick up the bike, will ya?”

The bullet righted, and me on my feet, I mounted it and we were off again. My right ankle pained, no doubt less so because I had been wearing riding boots, but made using the foot brake difficult nonetheless.  But we still had 11 hours of riding ahead of us, so I endured.


We’ve been home now for week and I was pleasantly surprised that this old body held up; no after effects.  So, next week we’re planning to do it all again, only this time no beach time, just moving from place to place.

I’ll let you know how it goes.